Once upon a time (1878) St. Tammany Parish was divided into nine wards. You don't hear much about them now, since the parish is now divided into districts, but many laws and ordinances at one time referred to wards. There are even a few Wardline Roads. Justices of the Peace and Constables operate under Ward jurisdictions.

Below is a complete and official description of the areas covered by the original nine wards, as specified on September 2, 1878.

In this document, it notes that four months after the original nine wards were made, an additional ward was created. On December 23, 1878, Ward 10 was established by Amendment  No. 1, and it covered Honey Island in the middle of the Pearl River swamp.

Amendment No. 2 came along six years later and abolished that original Ward 10 on July 7, 1884. Honey Island was then assigned to be divided among Wards Six and Eight.

Twenty eight years later, the police jury took action in creating a new Ward 10 on May 20, 1912, in the Abita Springs area, carved out of neighboring wards as the Abita population grew. 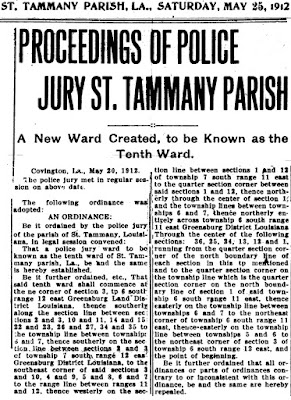 Here is a map of the ward boundaries in St. Tammany. 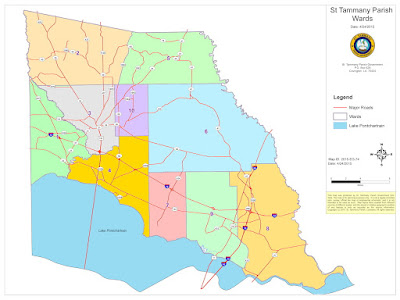