In 1992, Murrel deVeer wrote this article about Pauline Frederick Fuhrmann that appeared in the St. Tammany Farmer newspaper. Click on the image to make it larger. 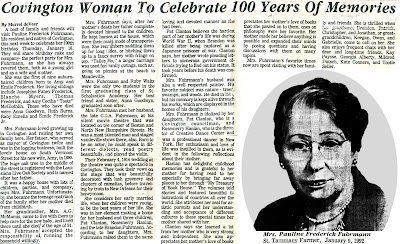 Here is the text from the above article:
Covington Woman To Celebrate 100 Years Of Memories
By Murrel deVeer

A host of family and friends will visit Pauline Frederick Fuhrmann, life resident and native of Covington, this next week to celebrate her 100th birthday Thursday, January 16. They will share birthday cake and company- the perfect party for Mrs. Fuhrmann, as she has always revered them, both as a young girl and as a wife and mother.

She was the first of nine auburn-haired children born to Amy and Emile Frederick. Her living siblings include Josephine Fahey Frederick, Blanche Myers, Thomas Frederick, and Amy Cecilia "Toots" McGlothlin. Those who have died were Anna Goodwyn, Ruth Burns, Baby Emelia and Emile Frederick Jr.

Mrs. Fuhrmann loved growing up in Covington and raising her own family here. Her father, who served as mayor of Covington twice and was in the logging business, built the lovely house on South Vermont Street for his new wife, Amy, in 1890. The huge oak tree in the middle of the street is registered with the Louisiana Live Oak Society and is named after her father.

It was a happy house with lots children, parties, and company, says Mrs. Fuhrmann. Unfortunately, she became the teenage matriarch of the family after her mother died from childbirth.

Her grandmother, Mrs. A.G. McManus, came to live with them to help care for the new baby, and lived there until she died at the age of 91. Mrs. Fuhrmann accepted the responsibility of running the household willingly.

Mrs. Fuhrmann says, after her mother's death her father completely devoted himself to the children. He kept horses; at the house, which were their main mode of transportation. She remembers saddling them up for long rides, or hitching them up to a fancy surrey with fringe on top. "Talley, Ho," a larger carriage was used for family outings, such as, going on picnics at the beach in Mandeville.

Mrs. Fuhrmann and Ruby Waltz were the only two students in the first graduating class of St. Scholastica Academy. Her best friend and sister, Anna Goodwyn, graduated soon after. Mrs. Fuhrmann met her husband, the late C.S.A.  Fuhrmann, at his silent movie theatre that was located on the corner of Boston and North New Hampshire Streets. He was a most talented man and staged vaudeville shows there, also. Born to be an actor, he could speak in different dialects, read poetry beautifully, and he    played the violin.

Their February 4, 1914, wedding at the theatre was quite a spectacle in Covington. They took their vows on the stage that was beautifully decorated with lush greenery and clusters of camellias, before traveling by train to New Orleans for their honeymoon. 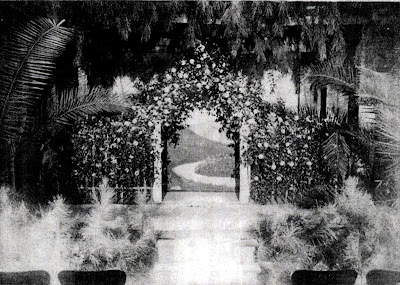 The wedding stage
She considers her early married life, when her children were young, to be the best years of her life. She was in her element making a home for her husband and three children, Pat Clanton, Rosemerry Hanian, and the late Brandon Fuhrmann. According to her daughters, Mrs. Fuhrmann raised them in the same loving and devoted manner as she had been.

Pat Clanton believes the hardest part of her mother's life was during World War II, when Brandon was killed after being captured as a Japanese prisoner of war. Clanton says, her mother wrote pleading letters to numerous government officials trying to find out his status. It took years before his death was confirmed.

Mrs. Fuhrmann's husband was also a well respected painter. His favorite subject was nature - trees, swamps, and woods. He died, but his memory is kept alive through his works, which are displayed in the homes of his daughters.

Mrs. Fuhrmann is idolized by her daughters, Pat Clanton, who is a Covington councilman, and Rosemerry Hanian, who is the director of Creative Dance Center and was a professional dancer in New York. Her enthusiasm and love of life was instilled in them, as is evident in the following reflections about their mother.

Hanian has delightful childhood memories and is grateful to her mother for having read to her especially by bringing far away places to her through "My Treasury of Book House." The volumes told stories and featured beautiful illustrations of countries all over the world. She attributes her zeal for artistic pursuits and her understanding and acceptance of different cultures to these special times her mother shared with her.

Clanton says she learned a lot from her mother who is very strong and independent. She also appreciates her mother's love of books that she passed on to them, ones on philosophy were her favorite. Her mother made her believe anything is possible and expanded their minds by posing questions and having discussions with them on many topics.

Mrs. Fuhrmann's favorite times now are spent visiting with her family and friends. She is thrilled when her grandsons, Brandon, Patrick, Christopher, and Jonathan, or great-grandchildren, Keegan, Owen, and Gabrielle, come to call on her. She also enjoys frequent chats with her dear and long-time friends, Kay Paysse, Georgia Alberty, Mildred Dutsch, Kate Conners, and Tootie Seiler. 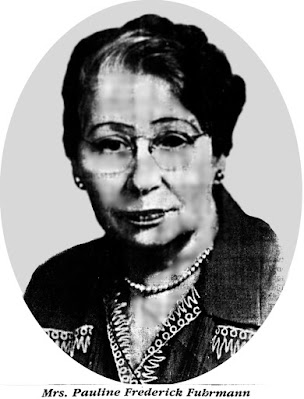