Clerk of Court Office Grown Up Since 1811

COVINGTON--  In 1811 James Tate performed the duties of the "Recorder" for the Parish of St. Tammany. He was responsible for recording important transactions for the parish. Then in 1825, several years past Tate's time, some changes came about. Taking over the registration off parish transactions was James B. McCay, the first Clerk of Court.

Now, a century and a half later (1977), that title has stuck and the lady who performs those duties is Lucy Reid Rausch. 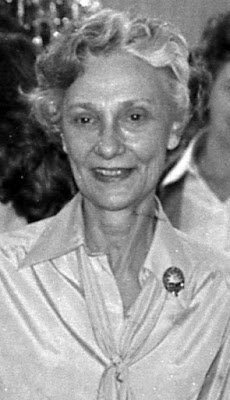 Things are quite different these days. Replacing the quill and ink well are electric typewriters, instead of roll top desks, there are sleek, modern office furnishings. The main functions of the clerk of court's office now include the inspection of polling machines before and following an election, all records of any legal document are cataloged by this office. marriage licenses are issued, divorces are recorded, passports handled, all court records for criminal and civil cases are kept there service discharges are also on file there as well as many other documented records-- 'too many to mention.' exclaims Mrs Rausch.

Many Changes, Some Recent

Many changes have elapsed not over the years, but in a matter of months. A new computerized index system went into operation in October of 1976. This system provides for easy location of mortgages, conveyance records, suit records, criminal records, and just about any record on file in the Clerk of Court's office.

Before clerk's assistants had to wade through pages and pages of names and chronological listings to find a particular document. Today, it is centralized on a computerized card and can be found in a matter of moments.

The practice of setting up a blackboard on election nights to post returns as they come in has been enacted by Mrs. Rausch. This allows persons coming in an easy look at returns without interrupting the clerk's staff.

Condensation of record books was recently completed. The clerk's office does not have an abundance of space, thus the consolidation and reduction in size of the former record books allows Mrs. Rausch's staff to put as many as six books in the space initially taken up by two.

In the matter of jury selection for the Twenty Second Judicial District, the names of prospective jurors were originally taken from utility and telephone company listings. As a result of a recent revamping program, added to the utility end telephone company listings was a computer print out from the driver's license division of the Louisiana State Police. Using this additional source allows for a better cross section reference.

A newly installed phone system helps to handle communication more efficiently. Until a few weeks ago, the clerk of court's office had as many as 42 busy signals within an hour, according to a telephone company survey. With the addition of a newer system, the office has two more Covington lines and a Slidell line, which enables the clerk's office to provide better telephone assistance to the parish.

Seemingly insignificant, a new coin operated copying machine was acquired recently for use by the public. This new machine, however, not only gives the public copies of their desired documents at a minimal cost, but relieves the clerk's assistants of the time consuming task of making copies and leaves them to do other chores.

The practice of sending notice of service to attorneys handling law suits has been revived. This is helpful to parish lawyers in that delays cause lapses in suits and the date a suit must be filed upon is of importance to the lawyer conducting the suit. Thus, this reminder of his time allotment is of vital importance to him, should he miss his time lapse, he would be inconvenienced by the procedures necessary to get another hearing date, if he were even granted another date.

For the future, Mrs. Rausch hopes to work on a program to update parish ownership maps. The documents which show land owners exactly what property they possess have not been revised since 1952.

An important faction of parish government, the clerk of court's office is one of the few self supporting branches. St. Tammany has been called one of the fastest growing parishes In Louisiana and a reflection of that growth can be seen in the clerk's office where various records show that progress has set in and St. Tammany is moving onward. 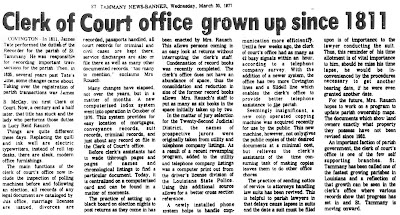 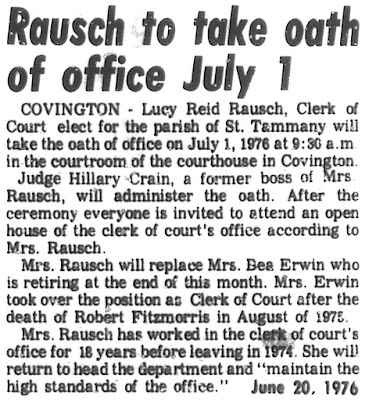 Mrs. Rausch took office on July 1, 1976
In August of last year, Mayor Mark Johnson of Covington made these comments about Mrs. Rausch:
"Miss Lucy had a forty-five year career of service to the State of Louisiana. She was the first woman elected parish wide and the first female Clerk of Court of St. Tammany Parish (where she served for twenty years from the mid-70s thru the mid-90s).

"As Clerk of Court, she oversaw the evolution of the Clerk’s office from manual to electronic communication and record keeping. Her tenure is remarkable for its professionalism, respect for constituents, impeccable performance and her down-to-earth friendly smile and manner. She was also known for her "Lucy" campaign ads:" 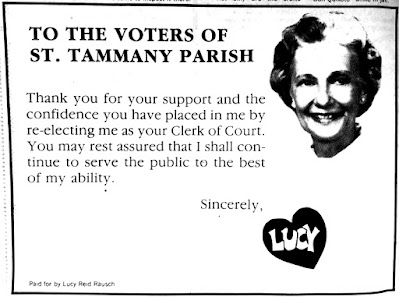 Clerk of Court Robert “Bob” Fitzmorris was the first to implement the use of computers and microfilm in the clerk's office.

A hundred years ago, in 1921, W. E. Blossman was the St. Tammany Parish Clerk of Court, and he was also determined to make improvements in the keeping of parish records. 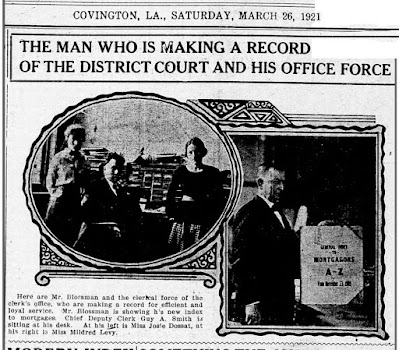 The 1921 improvements to mortgage index books 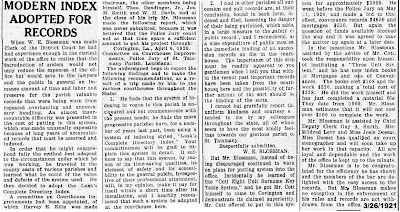 Lucy Reid Rausch Sworn In As Clerk of Court

Anna Lee Koepp Worked In The Courthouse Over the Years 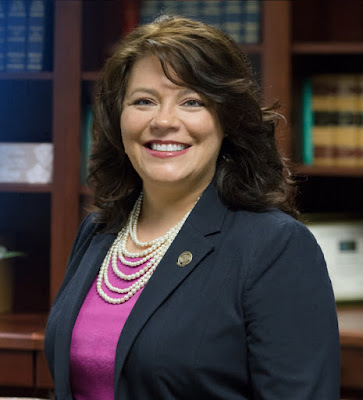 Melissa Henry became the Clerk of Court on July 1, 2016. Here is a website listing the improvements that she has made in the past five years.

In the past three years, the St. Tammany Parish Clerk of Court's office has been named a Top Workplace ( 2018, 2019, 2020) in a regional employee survey conducted by Times Picayune/Morning Advocate/Nola.com of private, public and non-profit organizations.

A list of Websites for today's St. Tammany Parish Clerk of Court Office