In March of 1977 Polly Morris wrote an article about the Lacombe Methodist Church. Here it is.

A miracle is supposed to happen suddenly. But a miracle can also be defined as an accomplishment so outstanding as to seem beyond human capability, like the United Methodist Church of Lacombe, the impossible dream that came true through faith and quite slowly.

The story of the church is also the story of one little woman named Eva Todd Derx, born in 1881, whose unquestioning faith inspired others when their own hopes faltered. Yet the story begins before she was born.

In April of 1878 William Henry Toomer watched as the country people put wild flowers on the new grave of his wife Marilda Barnard Toomer. She was laid to rest almost within the shadow of the little church which had been a joy to her, for with the money he had given her, plus donations, the tiny one room structure had been built with wood from his mill on Bayou Lacombe.

Nine years later he would lie beside her. The Toomer family would move away after an explosion at the mill, and the Protestants on the Westbank of the Bayou would move away, too.

The little church was deserted because wagons and buggies had to go up the bayou to cross at Martin's Landing, an inconvenience in those days. Church services were held at the home of John Alexander Todd on the east side of the bayou, but it was not the same to Eva Florence Todd, his little daughter.

Somehow it was more sacred in the little Toomer Church, which she remembered so well. From 1894 to 1896, the church was almost forgotten, then ferry service was provided and once again the wagons and buggies went to the Toomer Church. Now the Sunday morning services were held there, although the night services were still at the Todd home.

After 1917, after sawmills shut down in the area, the little Toomer Church was again abandoned and services were held at the public school until 1925. In that year the school was no longer available.

But meanwhile much had happened. John Henry Davis, a realtor, had begun a subdivision called Lacombe Park. When it was surveyed, Davis set aside a large plot of land which he gave to the community for a school, a park, and a Protestant church.

Eva Florence Todd had grown to womanhood and became a wife, a mother and a widow. It was only natural that she would offer her home for church services, especially since her husband John had also been a devout Christian.

However, the little Derx home was crowded indeed with worshippers, and Eva Derx was remembering how nice it had been to have a real church like that of her childhood. She and her brother Berry Todd discussed it with Dallas Springs of Slidell.

There was some good lumber in the old Toomer Church, and there was the Davis donation on which to build. Eva's brother Dan Todd got with the Reverence S. A. Seegers and John Chabreck. They carefully demolished the tiny church, bringing the usable lumber to the new site.

Berry Todd gave flooring and Eva Derx donated lumber for pews which were made by John Krentel of St. Tammany. The Schneider Brick Works of Slidell donated bricks. And on November 6, 1927, the Lacombe Methodist Church was organized.

The unpainted one room building was lighted with kerosene lamps, and it would be 10 years before it would enjoy electricity. It finally acquired paint and a pulpit, and services were held twice a month and in mid-afternoon. It seldom had more than fifteen members.

Then came 1946 and the Rev. J. P. Bonnecarre. His enthusiasm was equaled only by that of Eva Derx. He started making changes immediately and the congregation grew as quickly as the population increased. The Rev. Bonnecarre held morning worship every Sunday morning and there were two Sunday school classes.

There was not enough room inside the church, so the Sunday School groups met under the trees, sitting around old tables. The mosquitoes and rain often sent them scurrying for shelter in automobiles. There were complaints and members started going to more comfortable churches within automobile distance. Something had to be done to keep the new members.

The members discussed additions and repairs, but could not agree on a plan. The $100 in the Treasury was doubly discouraging. The windows were loose. The siding was hanging. There was a big crack under the door and only $100 to do it all.

It was hopeless. Eva Derx agreed that additions and repairs were impractical, so why not forget it? Then Eva Derx astonished everyone with a bold solution: Simply build a new church.

The members gaped at her in disbelief. Start a new church with $100? Of course, she stated emphatically. Use it up as far as it would go, and more would be forthcoming. The Rev. Bonnecarre concurred. "If you take the first step, the Lord will help you take the next one," he assured them.

The Church Is Built

Without realizing it, the other members let their hearts overrule their horse-sense and agreed. They could do their own work and the ladies could give cake and rummage sales.

On January 26, 1951, thirty adults and twenty children attended the ground-breaking ceremony. A sturdy little woman in spectacles, her hair streaked with grey, stepped up and turned over the first shovel of earth. No doubt it was a gratifying honor for Eva Derx to take the first step.

From then on it was nip and tuck to the finish, with workers whose names sounded like the church roll call. There were also non-Methodists and out of towners and school children all doing their part.

It could be said that Eva Derx was the living inspiration, the picker-upper of downcast spirits, and the organizer of projects. Lewis Leatherbury was the jack of all trades and mastered many before the job was done. He began as architect and ended as craftsman.

The People and the Progress

He helped C. J. Munro wire the church, and watched as I. F. Parker framed the windows and Roy Ussery hang the doors, given by ex-governor Richard Leche, Ralph Bird, and Aaron Todd of San Diego, CA, another brother of Eva's.

When Mrs. Louis Harkey said that the stained glass windows given by her relative were not to be used by the St. Charles Avenue Presbyterian Church, and that they were for going-after, Leatherbury borrowed a truck from Leche and he and Woody Powel went to New Orleans for the fragile and valuable gift. 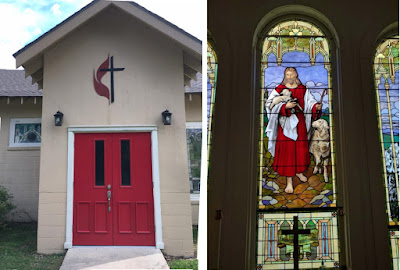 He also went for scraps of mahogany at a new home site, and he and Ralph Bird made a communion rail of quite some beauty, using a plane, broad handles and drawknife.

Usually the ladies preferred the more lady-like occupations but they did not shirk in removing old paint from old doors, and refinishing them with sandpaper and stain. The painting of the woodwork was theirs, after John Chabreck finished with the plastering. And Mrs. Jim Bird pitched right in when her husband was building the chancel and platform along with Luther Moran, Ralph Bird, C. H. Munro, and Leatherbury.

The work would stop for a brief time, and then could come more money or materials. Lenard Walton obtained tiles and laid them. Then he obtained carpet from a New Orleans firm. The Methodist Men's Club of Slidell donated the heating system.

The church could have its dedication free of debt!

From the stained glass windows The Good Shepherd looked down upon the flock that came to the dedication on March 9, 1952. Past the hand-hewn pews made by John Krentel filed many who had contributed to their ability.

The Slidell Methodist Choir added their joyous voices in praise along with the Lacombe members. And Eva Derx was the happiest of all, all of her childhood dreams realized.

If she had known that in 1958 she would die at the altar of her dear church, she would have probably been pleased with God's will at this beloved spot.

It is no small wonder that the members called the United Methodist Church the "Miracle Church." They had believed that the Lord would provide, and He did.

This same sentiment was expressed with simple eloquence by Ormond Hill, the pastor of a Baptist Church in Mandeville. He had erected the concrete block walls, and when he saw the completed church, he removed his hat, bowed, and remarked reverently, "De Lawd and His Works."

No one could have said it better. 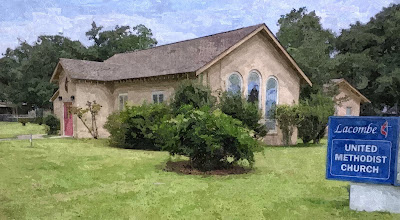 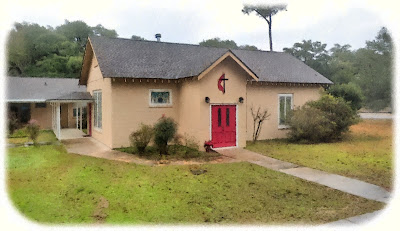 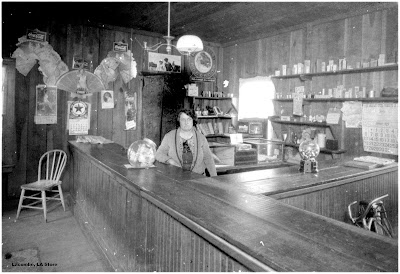 Eva Florence Todd Derx at her Lacombe store in the 1920's 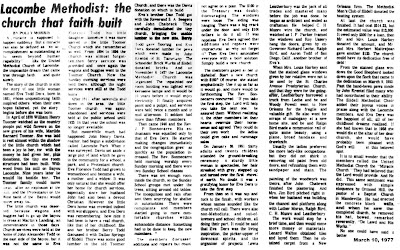 The Our Lady of Lourdes Shrine