Joseph Culotta Jr., a resident of Slidell for 34 years, earned a top spot in New Orleans area radio broadcast history with his popular radio "Let's Talk It Over" interview show that was on the air for twenty-five years.

He passed away on Saturday, July 14, 2018, in Slidell at 86 years of age. According to his obituary published by Honaker Funeral Home, Culotta was a man of many talents and pursuits, and one of his main accomplishments was his hosting the popular regional radio talk show from 1965 until 1990.

"Every Sunday morning for those twenty-five years radio listeners on the Mississippi coast, the New Orleans area, and much of bayou country would wake up to hear the lively discussions on his program," his obituary stated. The first 21 years of his show were on WTIX radio, and his last four on WNOE. 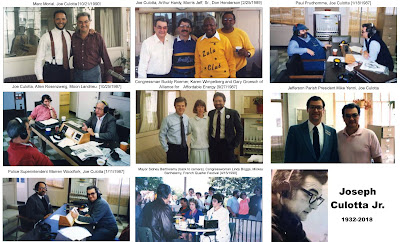 Some of his guests. Click on the image to make it larger.

"Every local mayor called him friend," his obituary stated.

The New Orleans Public Library offers a webpage about him with extensive information on his background and accomplishments:

Joseph Culotta, Jr. was born in Grand Rapids, Michigan, but moved to New Orleans at an early age. After service in the U.S. Navy, Culotta attended Tulane University, where he received a B.A. degree in 1964. Following graduation, he taught chemistry part-time at Tulane's University College and College of Arts and Sciences and at Newcomb College until 1971. He also worked full- time as a Southern regional supervisor for the Louisiana Department of Veterans Affairs, representing veterans and their families before the Veterans Administration.

In 1962 Culotta took over as host of the "American Legion Hour" on New Orleans' WTIX radio station, revising the format of the program to one of comprehensive coverage of Veterans benefits. In May of 1965, he became moderator of "Let's Talk It Over," one of the city's first audience participation discussion programs, which aired on Sunday mornings on WTIX. In 1986, "Let's Talk It Over" moved to WNOE, where it remained until 1990.

In 1984, following his retirement from the Department of Veterans' Affairs as the Southeast Regional Supervisor, Culotta taught night classes at Tulane University for many years. He went on to teach Chemistry and Physics at Pope John Paul II Catholic High School in Slidell. He retired from teaching in 1997.

A collection of his recorded interviews are archived in the Manuscripts Collection, Louisiana Division, New Orleans Public Library. It comprises  1,386 audiotapes and 99 photographs. The collection consists of audiotapes, primarily of his radio call-in/interview program. Also included are several tapes of "The American Legion Hour" (1962-1965) radio program and scattered tapes of "Mid-Month in New Orleans" (1969-1981), a taped program heard on approximately the middle Sunday of each month.

To view a spreadsheet of individual descriptions of each program, covering the years 1965-1990, CLICK HERE.  These listings include the names of guests who appeared on the program, a list of the subjects discussed, and a narrative description of the program

"The program also discussed a virtually unlimited variety of other topics, among them history, popular culture, hobbies, religion, health and medical issues, and education," the library website stated.

On September 22, 1985, Culotta interviewed me over the phone, and we talked about numerous subjects of interest to St. Tammany residents, economic issues mainly, but also about the Olde Town Festival in Covington and its emphasis on community history.