The Beginning of the Internet

In 1966, the Covington Rotary Club saw a demonstration by a telephone company representative that showed how a phone could be used to communicate with a computer in a distant location. Using a push button phone, a person could request and retrieve information from that computer regarding the status of inventory stored at that distant location. This was, in essence, a demonstration of the coming of the internet. 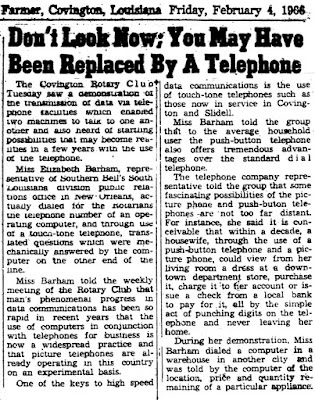 Here is the text from the above article published 55 years ago:

Don't Look Now; You May Have Been Replaced By A Telephone

The Covington Rotary Club Tuesday saw a demonstration on the transmission of data via telephone faculties which enabled two machines to talk to one another and also heard or startling possibilities that may become realities in a few years with the use of the telephone.

Miss Elizabeth Barham, representative of Southern Bell's South Louisiana division public relations office in New Orleans, actually dialed for the Rotarians the telephone number of an operating computer, and through the use of a touch-tone telephone, translated questions which were mechanically answered by the computer on the other end of the line.

Miss Barham told the weekly meeting of the Rotary Club that man's phenomenal progress in data communications has been so rapid in recent years that the use of computers in conjunction with telephones for business is now a widespread practice and that picture telephones are already operating in this country on an experimental basis.

One of the keys to high speed data communications is the use of touch-tone telephones such as those now in service in Covington and Slidell.

For instance, she said it is conceivable that within a decade, a housewife, through the use of a push-button telephone and a picture phone, could view from her living room a dress at a downtown department store, purchase it, charge it to her account or issue a check from a local bank to pay for it, all by the simple act of punching digits on the telephone and never leaving her home.

During her demonstration, Miss Barham dialed a computer in a warehouse in another city and was told by the computer of the location, price and quantity remaining of a particular appliance.