The St. John The Baptist Catholic Church in Folsom celebrates its centennial this year. The church plans special services on Sunday, June 13, at the 11 a.m. Mass. Archbishop Gregory Aymond will serve as the principal celebrant alongside Father Vincent Phan, the church's 15th pastor. The centennial program is called, “100 Years of Faith and Family.” 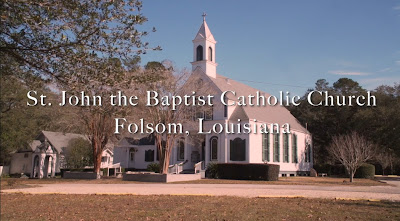 Image from the video

A special video was prepared about the people of the church, its history, and particularly its founder Father Odilo Alt. The video goes into extensive detail about how the church building was originally the chapel at the Chinchuba Institute for the Deaf in Mandeville, how it was moved, how it was enlarged and rebuilt. Old photographs are featured of the congregation across the years, and much information is shared on the stained glass windows: where they came from, what they illustrate, and how important they are to the church and community.

To view the video which was produced four months ago by Stellarblade LLC, CLICK ON THIS LINK to go to the Vimeo video hosting website.

An article in the recent edition of the Clarion Herald said the following:

"It is called the “Little Cathedral in the Woods” for a reason. For St. John the Baptist Parish in Folsom is literally hidden behind trees and only accessible on two-lane roads. Yet, that didn’t deter Benedictine Father Odilo Alt from traveling on horseback in 1920 searching for Catholics to celebrate Masses and administer sacraments." The article was written by Christine Bordelon.