The Northshore Traditional Music Society played music at the Columbia Landing gazebo Friday night, entertaining visitors from the June Block Party and Car Show. Members of the Steve Anderson band took part in the event helping to set the pace. 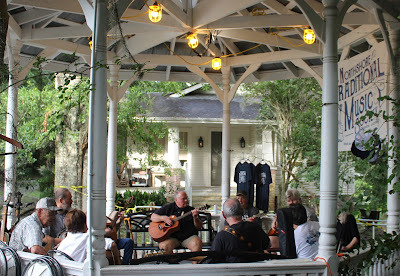 Columbia Landing gazebo: Click on the images to make them larger. 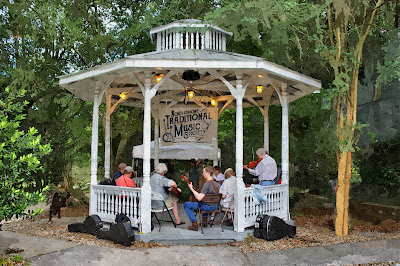 The group had also played during the May Block Party event 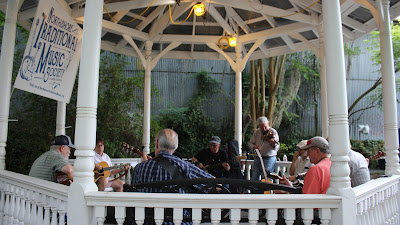 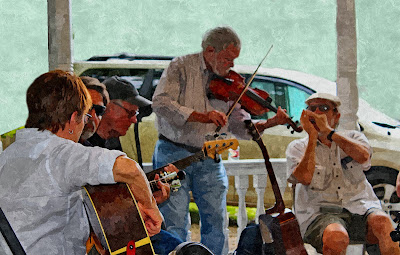 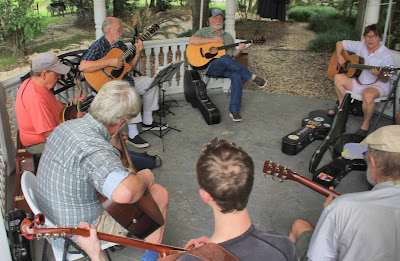 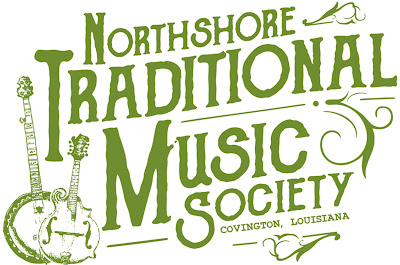 The society was officially organized in 2020 as a non-profit organization, although it has been active for several years, primarily at the Marsolan's Feed Store Music Series. The people involved are connected with several different bands and music groups, but the Northshore Traditional Music Society is aimed at helping people get together with others, maybe learn some new music, and enjoy regular jam sessions.
"Our Saturday concerts at Marsolan's will start up again in the fall," said Chris Talley, one of the leaders of the group. The people who were involved in organizing the very popular Saturday concerts at Marsolan's  have now incorporated their new group as a non-profit so they could start raising funds to continue various community activities. "We had been paying for things our of our own pockets, and that got to be a strain," Talley commented.
While there is no definite "membership" in the group, there is a five-member board of directors that manages things. Signing up new members is something they are working on, but the board members themselves are very active in community events, both the Farmers Market and other businesses. They all have a heartfelt desire to promote the playing of music and helping others develop their own musical talent. 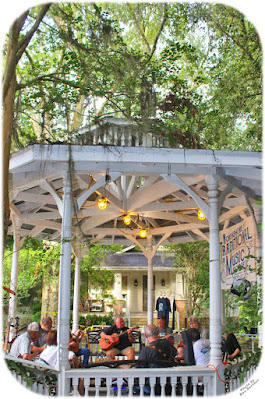 The Society's Mission
Talley has a band of his own, the Three Rivers Cooperative, and Steve Buchholz is associated with a song writing group and other bands. "We're all pretty busy," Talley said. "We could spend all our time doing this." Talley has been associated with the Abita Springs Opry for years, serving on its board, and his band is one of the Opry's house bands.
The newly-established Northshore Traditional Music Society was designed to be "complementary" to what's already out there, Talley explains. "What we are trying to do is encourage people who like to play music but don't have an outlet to get together with other people to play," he said. "We are trying to do some concerts, but mainly we are trying to encourage more participatory events."
"Right now it's just jamming, but in the future we hope to do some workshops and other educational stuff," he went on to say. "We started off really ambitious, and we had a whole list of things the Society was going to kick off with, but then CoVID-19 hit and kind of rolled us back."
The Society is now getting back up to speed, planning to do some outreach into the musical community and providing educational outlets for its members and prospective members.
Learning Music
Being a music teacher, Talley has several adult students who work not only to become better musicians, but also are seeking a group to just play music with, and that's where the Society comes in. "What I have found is that there is a lot of what I call 'orphan musicians' sitting at home looking for other musicians to play with and events to play at."
"That's who we are aiming at," he said. "People just getting together and playing music is sort of a dying institution.  It's about making music together, and encouraging each other when the music is really good."
Learning music is a very humanizing experience, he said. "First of all, you invest a lot of yourself in learning how to play, and then it comes to sharing that skill and working with others. "It's a very social thing." And thus the word "Society" is an appropriate part of the organization's name.
"Sometimes when my music students start getting discouraged about not learning as fast as they want to, maybe even wanting to quit trying altogether, I just tell them that in all my years as a music teacher, I've never had a student come to me and tell me how glad they were that they quit taking music lessons. It's always about how much they regret not going on with their lessons," he noted.
Playing music is something a person can do their entire life, he said.
Paying the Bills
The Society does make a little money selling baseball caps and T-shirts, and that money goes toward paying the expenses of the "anchoring band" that helps keep the notes flowing during scheduled events.

Talley knows that the mission of the Society is appreciated by the community, providing performances for the general public at special events.
A website is being put together for the group, and it will be fully operational in a few weeks. The website address is already secured and will be pointed to the new website when it is ready. 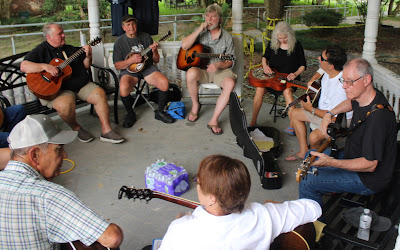 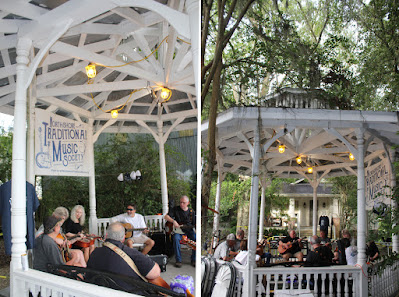