The story of John Gibson was found in the following article printed thirty-something years ago in the St. Tammany Farmer newspaper. He was the man after whom Gibson Street in Covington was named, and the article shares information about how Gibson, a co-founder of Covington, was personally involved in the publishing of several major New Orleans newspapers.

Here is the article:

When Mrs. Thomas Wharton Collins waited on General Washington in Philadelphia to secure her husband's release from a military prison, she was accompanied by her little chatterbox daughter, four-year-old Sarah. While the General listened to Mrs. Collins' story he held the pretty little prattler on his knee.

After the interview ended he set the child down with a kiss and signed her father's release. In the months that followed, Washington in his walks down Chestnut Street, would often single out the little girl from her playmates for a kiss and inquire about her parents.

In 1793 she married William Gibson of Kirkenbrig, Scotland. They were the parents of thirteen children, John, born April 25, 1797, being the third. When Gibson reached 15 years of age, he followed the call of the Ohio Valley and the Mississippi to join his uncle, John Wharton Collins in New Orleans, to whom he was attached as a child.

A short, stocky, florid Scotsman with a roguish twinkle in his eyes and a highly seasoned temper, he remained in Covington in the home of his uncle until Collins' death, which, at that time, found the Collins estate largely embarrassed over the fact that there was a minor child's interest involved and a widow incapable of administering the property and to carry on the sale of the lots, for which there was a growing demand.

Accordingly, in June, 1818, Gibson married his uncle's widow and for the following seven years they remained in Covington until the last of St. John Division, the original part of town, had been parceled out. In 1824, John and Marie, along with young Thomas Collins, returned to New Orleans, leaving but a single street in Covington as a landmark to their former presence.

In New Orleans he found his metier in a career that would allow him full sail in whatever way he chose to assert himself, being at home in any controversy partizan by nature.He first became owner and editor of the Louisiana Argus, a newspaper which he published in English and French for seven years.

From the year 1828 on, Gibson's career was stormy indeed. In the presidential contest between Andrew Jackson and John Quincy Adams which followed, the Argus espoused the candidacy of Adams and when Jackson had decided to visit New Orleans for the ostensible purpose of renewing old friendships, Gibson opened up with all editorial guns against Old Hickory, causing the General to leave the city in the midst of the celebration which was going on in his honor when he swore he would never return again.

But this did not ease off Gibson and the Adams supporters and when the bill for Jackson's entertainment was presented to the Legislature it was only honored in part.

On December 23, 1833, he acquired the Louisiana Advertiser. In 1835, the name was changed to the "True American," which he continued to publish and edit into the early 40's. On acquiring the Argus, Gibson adopted as his slogan "Faithful and Bold," which he carried on the mastheads of the different papers he published. 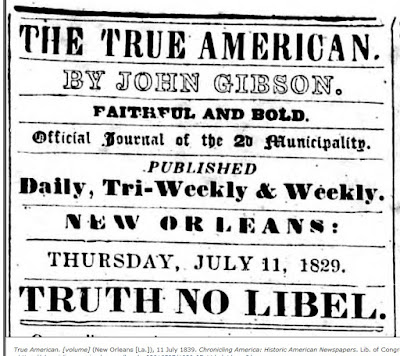 In the opinion of George W. Cable and Lafcadio Hearn, John Gibson was considered one of the first of the early enterprising journalists of New Orleans. He made the True American a very snappy publication and, as they say, "the first editor to pay any attention to local news and politics." 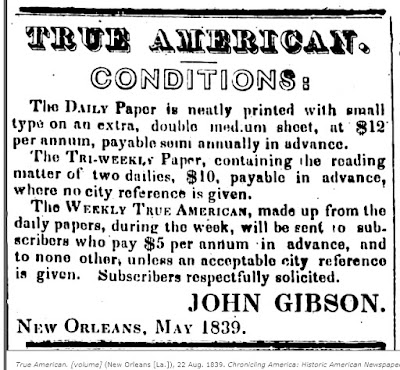 By the time January 25, 1837, arrived, the New Orleans Picayune appeared, published by F.A. Lumsden and G.W. Kendall, Kendall having served his newspaper apprenticeship in the office of the True American.

In Volume I, No. I of the New Orleans Picayune John Gibson offered a prospectus of the commercial news and reading room for persons of culture that he was providing in his newspaper office at the corner of Magazine and Natchez in the Bank's arcade building.

Outside of the historic files of those early New Orleans newspapers he edited, Gibson in collaboration with young Thomas Collins has left us a guide book to the City of New Orleans which today is not only of pronounced historical value but is a priceless collector's item as well. 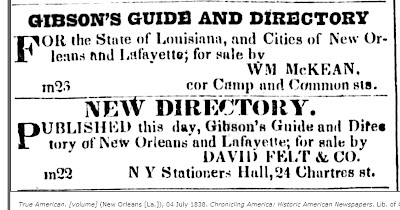 Following the establishment of the Picayune he retired to private life where he rounded out his days as a clerk of court in Tampico, Mississippi, having provided his gifted nephew and ward, Thomas Wharton Collins, with an education that led him to the fine social and professional heights he enjoyed in his day. 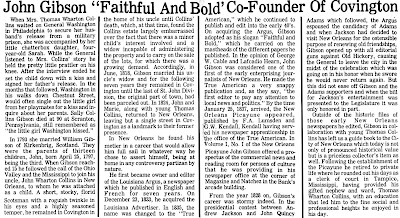 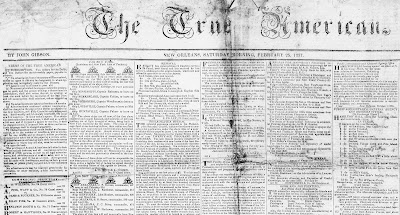 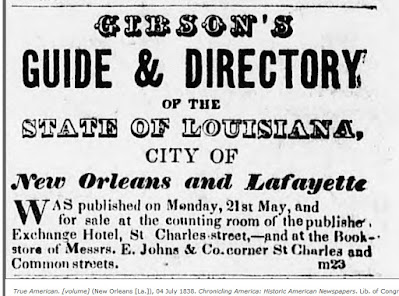 According to Google, Gibson's Guide and Directory of the State of Louisiana, and the Cities of New Orleans & Lafayette, includes the following information: the Officers of the United States for Louisiana, and an Historical Notice Of the State, Its Boundaries, Products, and Government, Its Officers, Executive, Legislative, Judicial, and Ministerial; the Terms of Courts in Each Parish, Different Divisions of the State, as Parochial Senatorial, Congressional, Judicial Electoral and Military. Improvements, and Institutions, as Rail Roads, Canals, Colleges, Public Schools, Its Revenue and Expenditure, Salaries, and Terms of Officers, Etc. : An Historical Notice of the City of New Orleans, from Its Foundations with a Reference Map; Government Division, Officers, Alleys, Public Squares. Buildings, Wharves and Projected Improvements, Revenues and Expenditures, Salaries, and Terms of Officers, Corporations, Etc. Etc. Etc; : the Names and Residences, and Places of Business of Its Citizens, : and Generally Every Thing Useful, and Interesting. : the Whole Embellished with Upwards of Fifty Beautifully Finished Lithographic Views of the Principal Public Buildings. 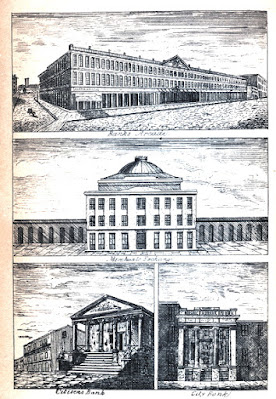 A page from Gibson's Guide to Louisiana, with engravings showing some of the key public buildings in New Orleans