In 1909, Alcée Fortier, Lit. D., a professor of Romance Languages in Tulane University, edited a two volume encyclopedia on the state of Louisiana. It was described as "Comprising Sketches of Counties, Towns, Events, Institutions and Persons, Arranged in Cyclopedic Form." It was published in Atlanta, GA, by the Southern Historical Association.

Here are some excerpts from the encyclopedia entry regarding The City of Covington in 1909.
Covington
Covington, the seat of St. Tammany parish, is beautifully located in the western part of the parish, between the Bogue Falia and the Tchefuncte river just above their junction, and on a dry, sandy soil that is easily drained, which makes the site an ideal one for a city.

The town was first incorporated under the name of Wharton on March 19, 1813, when it "was dedicated to Thomas Jefferson by his fellow citizen, John W. Collins." By the act of the legislature, approved March 11, 1816, the name was changed to Covington. and in 1829 it was made the parish seat. 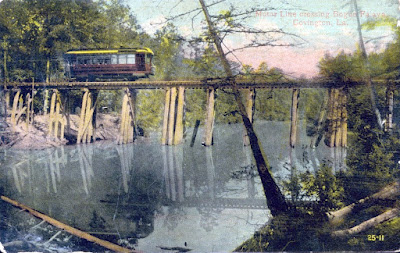 As Covington is situated in the long leaf pine district. lumbering is the principal business interest, though there are other manufacturers, including ice, brick. etc. Being surrounded by open pine woods and well supplied with a fine quality of artesian water, the town is popular as a health resort, and is visited annually by over 100,000 visitors. There are two banks, three newspapers, a public library, a good fire department, a beautiful public park, recently opened, overlooking the Bogue Falia river, a good public school system, several private educational institutions, including Dixon academy and St. Joseph's college, a well conducted electric light plant. and churches of all the leading religious denominations.

The city's trade in groceries and grain amount to over $1,200,000 annually, and the business in other mercantile lines is in proportion. Covington is preeminently a city of homes, and the two building and loan associations are both doing a good business in building up the place by increasing the lumber of home owners. The population at the beginning of 1909 was estimated at 4,000. 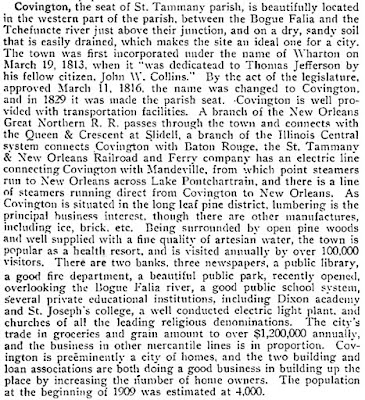 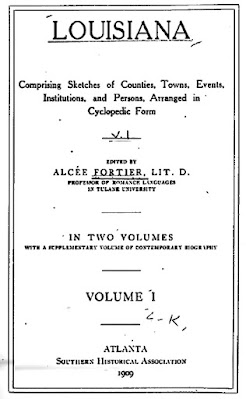