Here's the news article announcing the hiring of Sid Theriot as head football coach at Mandeville High School in 1967. Click on the image to make it larger. 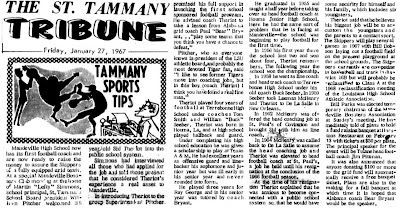 Coach Theriot served as coach and math teacher and started the first football program at the school in the mid-1960’s. Mike Dobson, a  Mandeville High School graduate who played on the school’s first football team in 1967, recalled that in the first year of football at Mandeville High,  “Coach Theriot laid out the field, planted, watered, and cut the grass, lined the field before home games, washed the uniforms after the games, prepared scouting reports of the next games, wrote the articles that appeared in the paper, and many times drove the team bus. He had tremendous work ethic, taught us the value of teamwork, and was unselfish with his time and effort.”

Dobson went on to say that few people have ever had to overcome the hurdles associated with starting a football program from scratch.  St. Tammany Parish has grown exponentially since the football program was started at the then very small MHS in the spring of 1967.

"Every new school that has been started since then has at least had some students that had a prior opportunity to participate in organized football.  Coach Theriot did not have that luxury, in fact, to my knowledge, none of the 30 plus players had any prior 11 man football playing experience.  He literally had to almost single-handedly do everything with the program.

"He had mostly volunteer assistants and together they taught us how to properly put on the equipment, learn the basics, give maximum effort, and compete with dignity and class," Dobson concluded.

In 2009, it was announced at a school board meeting that Mandeville High football stadium would be named after Theriot, and he received a standing ovation for his contributions to the school and School System.
On August 31, 2016, the Times Picayune ran an article about Mandeville's first football team and its coach Sid Theriot. To read the article, CLICK ON THIS LINK.
In honor of that first football team, Coach Theriot and about 20 members of that year's squad were recognized on the field in pregame ceremonies at one of the school's games in 2016. Several  players recalled how it came together that first year.
Back in 1967 Covington High and Slidell High had football teams, and Coach Theriot felt there was enough interest for one at Mandeville High. Meeting with the school's basketball coach, he worked up a list of possible football players. A team was fielded, and the first season Mandeville came in with four wins and five losses.

“The parents really came through with getting us a field ready, with the stands and the lights you need for Friday nights,” Theriot was quoted. “When we got there for practice, we had to show (the players) where the line of scrimmage was and what a football looked like,” he jokingly added. “We learned a few plays and did the things we needed to do to look like a football team. And we did better than a lot of people thought we would, I think.”