Building a bridge across Lake Pontchartrain from New Orleans to the Northshore was a hot subject in the early 1900's. Many favored a centrally-located bridge from New Orleans West End to Mandeville. However, over in the Slidell area in the 1920's promoters of a five mile long bridge on the east side of the lake won state approval for their idea. So they got together and built the Watson-Williams Bridge which was opened in 1928 (later known as the Maestri Bridge.) 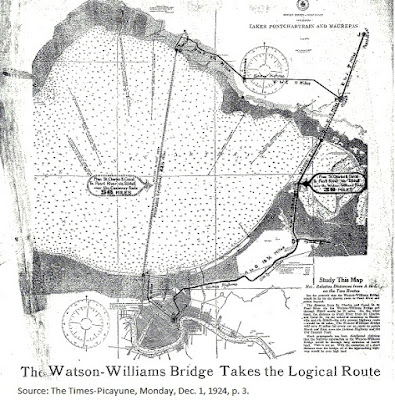 Click on the images to make them appear larger.
This was the view on the five mile long toll bridge. 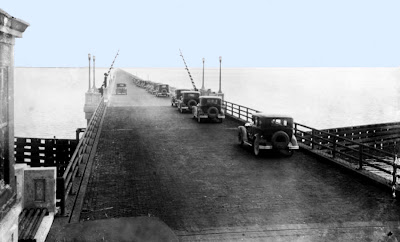 1925
Competition to the Watson Williams bridge sprang up in 1930, with the state building a bridge over the Rigolets near Fort Pike. 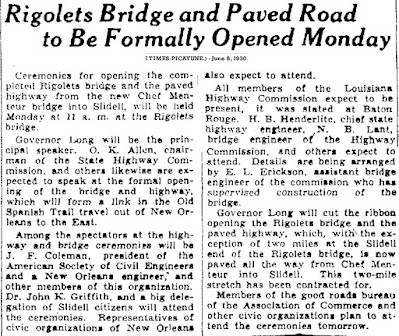 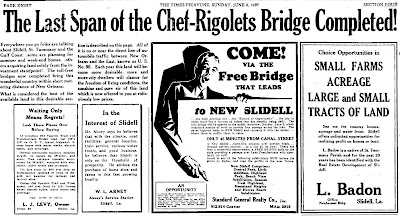 The public outcry against the tolls on the Williams-Watson bridge prevailed and in 1938 the state decided to buy the bridge and make it a free crossing as well, renaming it the Maestri Bridge in honor of a mayor of New Orleans. 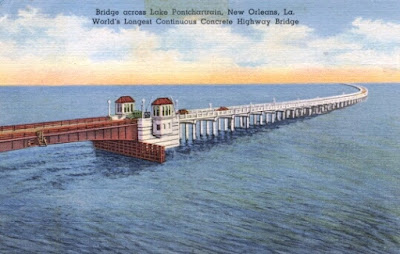 The postcard above shows the "Maestri Bridge" over Lake Pontchartrain from New Orleans to Slidell, at that time the "world's longest continuous concrete highway bridge." 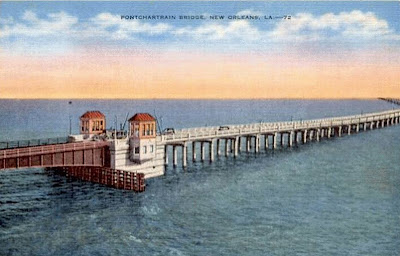 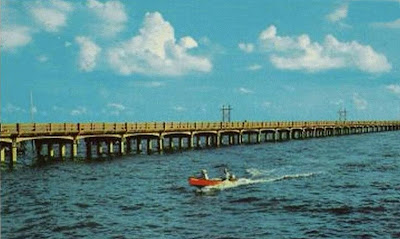 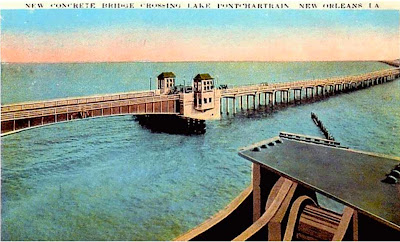 It survived the high surge waters of Hurricane Katrina and was a much-needed backup route for traffic from Slidell to New Orleans after the storm.

A major $28.36 million renovation project to replace the bridge began in August 2018, with a contract time of three years. The contractor, American Bridge Co., worked on the replacement of two draw bridges, which included concrete and structural repairs, grid deck replacement, painting, installation of a new fender system and the rehabilitation of electrical and mechanical systems on the two draw bridges.

In a status report on the work, released on December 4, 2020, the Louisiana Dept. of Transportation and Development said that work is progressing, and while the project was expected to be finished early, delays have resulted due to COVID-19 and several tropical storm systems. The anticipated completion date has been extended to Spring 2021.

“When the New Orleans region was in a storm’s cone of uncertainty, crews were required to disassemble temporary supports, lower the bridge and lock the bridge into place. Once the storm had passed or the storm was no longer a threat, crews had to reassemble the temporary supports back into position in order that the bridge could be raised. The project was impacted by six storms during the 2020 hurricane season,” according to the DOTD report.

Despite the extension, the project is still expected to be completed within the number of days provided in the contract. The project was ahead of schedule as of December 4, 2020, and the bridge remains open to marine traffic with a horizontal restriction of 70 feet.

“All construction activity is weather dependent and may be rescheduled in the event of inclement weather. DOTD appreciates the motoring public’s patience and reminds drivers to please exercise caution when traveling through work zone areas and be on the lookout for work crews and their equipment,” the report concluded.