In 1919, one hundred years ago, Jahncke Shipyards was being applauded for its outstanding work in producing wooden ships for World War I. Wooden ships had been proven less vulnerable to enemy mines than metal ships, so the expertise of Jahncke workmen in putting out excellent quality wooden ships in record time was appreciated by the war effort.

However, after the war ended, so did many of the government contracts to build ships. Shipyard leaders as well as community supporters rallied and sent representatives to Washington to try to convince the government to continue to rely on wooden ships in addition to metal ships.

Here are a couple of articles about those Jahncke shipbuilding efforts back in 1919. Click on them to make them larger and more readable. 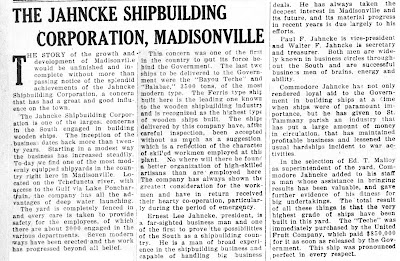 Click on the video 'play' triangle for a view of shipyard workers in Madisonville.
To see a large number of photographs spotlighting the Jahncke Shipyards, CLICK HERE for a video slideshow presentation.

Photographs from Jahncke Shipyard
Posted by Ron Barthet at 3:00 AM