St. Tammany has been home to a number of fine artists, but even in its early years, say about the 1850's and 1860's, there were many visiting artists who came across the lake from New Orleans to capture on canvas the scenes of daily life in St. Tammany.

Several of Richard Clague Jr. paintings featured scenes from the north shore of Lake Pontchartrain. Here are a few of them: 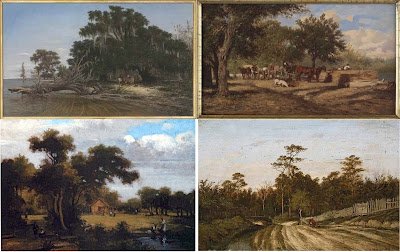 According to the website "64Parishes.org" Artist Richard Clague Jr. and his students often worked in New Orleans’ City Park or at his studio. He also spent many summers during the 1860s working in the wetlands along the southern coast of Louisiana near the resort towns of Mandeville and Abita Springs. 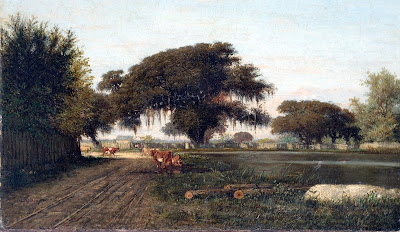 The above painting was produced by American artist Richard Clague (1821-1873) sometime between 1851 and 1870. The artwork is entitled "Farm in St. Tammany." Click on the image to make it larger. Painting Source: LSU Museum of Art

According to Richard Anthony Lewis with the Louisiana State Museum, Richard Clague (1821 -  1873) was widely credited as the founder of the landscape painting tradition in Louisiana. Born in France, Clague received most of his formal artistic training in Europe.

"Clague helped define a market for easel-size landscapes following the Civil War. Influenced by realism and the Barbizon School in France, Clague’s naturalistic approach to landscape painting appealed to middle-class patrons. He was also among the most successful teachers in Louisiana, inspiring a generation of landscape painters known as the “Bayou School.”

Lewis goes on to say that in 1850, Claque was in New Orleans with a studio at 40 Camp Street, listed in the city directory as a painter and teacher.  "However, he seems to have lived primarily in France, opening a photography studio in Paris about 1853.

"From November 1856 to March 1857, Clague traveled to Egypt with the French Army. According to New Orleans papers, he worked as a “special artist” on an expedition to find the source of the Nile River. Given the École’s curricular emphasis on drawing, it is not surprising that landscape sketches Clague produced on this trip demonstrated a mastery of French academic practices and conventions.

"In 1857, Clague returned to Louisiana to establish an essentially permanent residence. He spent his remaining years living modestly in Louisiana, often staying with the de Breuys family, to whom he was related.

"He also spent many summers during the 1860s working in the wetlands along the southern coast of Louisiana near the resort towns of Mandeville and Abita Springs.

"Clague died in Algiers, across the Mississippi River from New Orleans, on November 29, 1873, at the age of 52. His obituary in the New Orleans Bee was unequivocal: “Mr. Clague has stood at the head of his profession in this state and his works have always been highly regarded by connoisseurs in New York as well as here.”
See also: