To say that Vernon Antoine Brou Jr. and his wife Charlotte study butterflies and moths is an understatement. The Abita Springs area couple have etched out a reputation of considerable renown for their knowledge of Louisiana Lepidoptera and the skills for collecting them.

Their work, both in the field and in publishing reports on their findings, have earned them thanks, acknowledgements, and appreciation from museums around the world which have been the recipients of their insect collection donations. 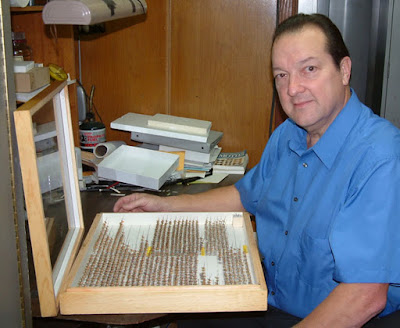 The pages of the Southern Lepidopterists' Society newsletter are filled with their research, detailed articles describing all manner of lepidoptera, as well as "how to" instructions on collecting and preserving.

The couple has placed numerous "traps" across their ten acres near Abita to capture their insect specimens. "This location has undergone extensive surveillance of the populations of many insect orders, using several hundreds of self designed insect traps of many types and purposes," according to Brou.

"Insect traps have operated continuously for the past 36 years, year-round 365-366 days and nights, 24 hours every day, regardless of weather conditions or temperatures.  As a result, this trapping location is recognized worldwide by professional and amateur entomologists to be the "most intensely studied area in North America pertaining to its insect fauna.  Hundreds of insect species new to science have been discovered at this location." 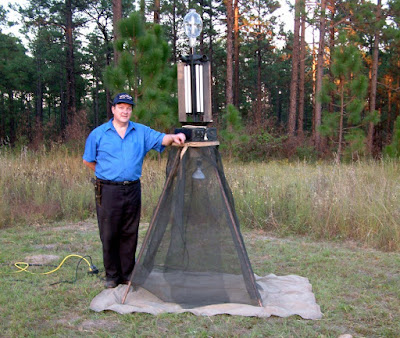 The Abita Entomological Study Site is probably the most intensely studied entomological location in North America.

The couple also travel the state at times, placing additional traps.   Why are so many traps necessary? To get a good sampling of the insects for study, primarily for insect photography for Vernon's many scientific publication contributions.

Their insect specimen donations to museums and nature centers have been well-received and sought after across the United States. Members of the Lepidopterists Society since 1968, they have followed their passion in the field by self-funding much of their own entomological research.  "This is my 49th year of operating numerous insects traps continuously ," Vernon stated.

Among his involvements have been working as a Research Associate for the Florida State Collection of Arthropods since 1972, being a charter member of the Southern Lepidopterists Society as well as a member of the Entomological Society of Washington since 1985. He's also been a Research Associate for the McGuire Center for Lepidoptera and Biodiversity, Florida Museum of Natural History since 2010.

A lifetime resident of Louisiana, Vernon was born in 1949, and he began his interest in insects as a very young child. "My activities became more scientific around 1968, and I began light trapping during 1969, and have continued to run numerous types of insect traps including a series of five to seven or more high-wattage light traps continuously 365-366 nights each year since that time to the present, regardless of weather conditions." Charlotte also is a lifetime resident of Louisiana.

Publishing his photographs and data is a key component in the work. "We published in two parts (1997 and 2002), a 30 year study of the Sphingidae of Louisiana, which also resulted in the discovery of a new sphingid species, Lapara phaeobrachycerous Brou.

"Our biggest investigation involved the Sphingidae of Louisiana and covered the years between 1970 and 1999. During that time we reported capturing 83,889 Sphingidae specimens representing 46 species within the state of Louisiana," Vernon explained. 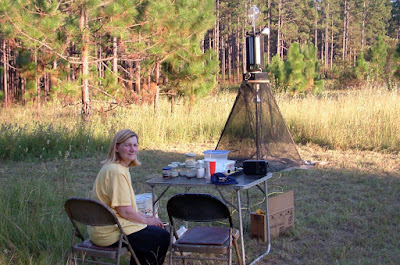 They have published 399 entomological articles/investigations over 49 years. Their research and interest is confined to the state of Louisiana, however, and trips are made across the state to sample different habitats. Charlotte has been his assistant and companion over 43 years of these daily entomological endeavors, and one new species, Catocala charlottae Brou was named in her honor, Vernon noted.

The work required them to be quite inventive at times, designing and producing more effective traps with which to capture desired specimens. Well over 400 various specialized insect traps, and associated collecting devices were designed, constructed, tested and operated, including: flight traps, bait traps, pitfall traps, and pheromone traps.  Each night during most years, some 80 to more than 130 traps of various types were in operation.

"We have concentrated on moths, collecting millions of moth specimens alone, and insects of all orders, processing hundreds of thousands of Louisiana insects for distribution to researchers and museums throughout the world.  We have discovered several hundred new undescribed moth species in Louisiana.  At this point, we have officially donated in excess of 343,238 Louisiana insects to museums in the United States alone," Vernon recounted.

One new species of saturnid moth was discovered and co-described by Brou. It was named Automeris louisiana Ferguson and Brou. 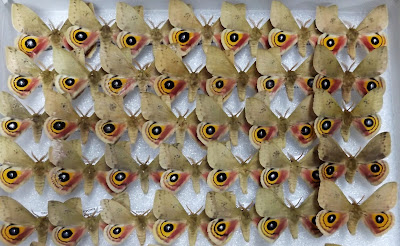 
The Contributions of Vernon Antoine and Charlotte Dozar Brou

The following information is one published account of his success in the field, since he is regarded as "one of America's preeminent private Lepidopterists."

"Vernon began his unofficial career as an insect collector as a young child over 60 years ago, and in 1969 began continuous operation of ultraviolet light insect traps (i.e., every night of every year) since then, with only a 30-day interruption without electricity following the passage of Hurricane Katrina," it was stated. The eye wall of Katrina passed over his property, causing much destruction and a small distraction from the valuable work of insect collecting and research.

"Vernon's seasonal data for moths at his property in Abita Springs is one of the most comprehensive data sets on "seasonality" or phenology of these insects available anywhere in the world. In addition to his personal collection, he and Charlotte have donated in excess of 343,000 archival quality specimens, including long series of newly described and rare species, to various institutions over the years, including 209,640 insects to the Louisiana State Arthropod Museum (LSAM.)"

"Vernon is also an accomplished photographer, and one of the most prolific specimen processors known. Vernon and Charlotte assist with displays and outreach for organizations, including the Audubon Institute in New Orleans, and the Louisiana Department of Wildlife and Fisheries. Just one tray from the 2009 LSAM donation consisted of approximately 28,000 specimens. 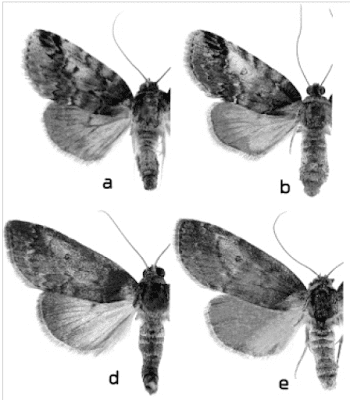 "Vernon is the winner of the prestigious John Abbot award for the year 2000 presented by the Southern Lepidopterists Society. An exhibit dedicated to Vernon's accomplishments is on public display at the Audubon Insectarium in New Orleans. The display uses Vernon's passion for moths to highlight the contributions of private collectors to the science of entomology and taxonomy worldwide.

"We at the LSAM appreciate and acknowledge Vernon's and Charlotte's valuable contributions to our museum holdings and to the knowledge of Louisiana's Lepidoptera fauna," the organization stated.

Trapping, collecting and processing insects are not without their challenges, however, as Brou found out in 2012 when he "fought the bugs and the bugs nearly won!" To read about that life-threatening situation in which he found himself, CLICK ON THIS LINK for a PDF file.

The Brou's have published more than 400 articles and investigations mostly on Louisiana Lepidoptera. Vernon and Charlotte have welcomed inquiries and collaboration with residents of all parishes interested in discovering and expanding the knowledge base of Louisiana Lepidopterology.

To read a list of the hundreds of articles and investigations written up by the Brous, CLICK HERE to read a PDF file containing the titles, descriptions and names of the journals publishing their research and photography. 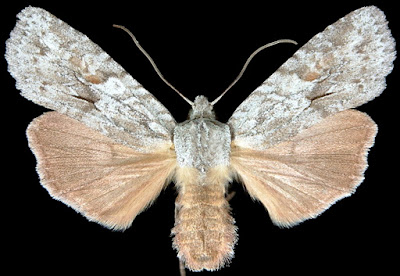