In the winter of 1986, some thirty-two years ago, Jazz historian Dr. Karl Koenig wrote a great article in the New Orleans Jazz Club magazine "The Second Line." The article dealt with the music heritage of Mandeville: its musical styles, musicians and appreciative audiences.

He particularly wrote of the band leaders who regularly visited the Dew Drop Dance Hall. Dr. Koenig's background and expertise in researching New Orleans jazz made him an excellent choice to chronicle the historical highlights of the legendary dance hall establishment. 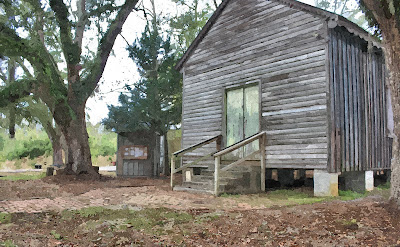 His article is filled with rich detail and fascinating tidbits about life in Mandeville in the early part of the 20th century. There were dances of every description, local bands, traveling bands, excursion boats, hotels, and people came from far and wide to enjoy it all.

The following are three excerpts from the article:


"New Orleans bands traveled across the lake on boats, playing for their passage to the north side of the lake. Their itinerary might include playing in Madisonville on Friday night, the Dew Drop Dance Hall on Saturday night and Abita Springs on Sunday. The circuit might include Bogalusa on Monday, and other small towns on other nights. They might return to play the Dew Drop on Wednesday, sleep there and catch the boat back to New Orleans for a job on Thursday.

"Along the shore line of the northern part of Lake Pontchartrain there were three boat landings and a number of hotels, all using live music. Many of the local musicians liked the style of country living in Mandeville and found enough work in the area. They did not want to, or have to, go into New Orleans for work. The Dew Drop had at least two dances a week."

Dr. Koenig also wrote about life in Mandeville based on his talks with Ella Paine and Norma Core, two well-known area personalities. Here is an edited excerpt where their recollections were spotlighted:

" Ella Paine, born in 1895, lived all her life on the lakeshore on the corner of Coffee and Lakeshore Drive. She remembers seeing the boats land and hearing the music of the bands from the boats. Many of the people from the boats stayed near the boat in the pavilions built on the ends of long piers, around 150 yards into the lake as the big boats could not come near the shore due to the shallow water there. 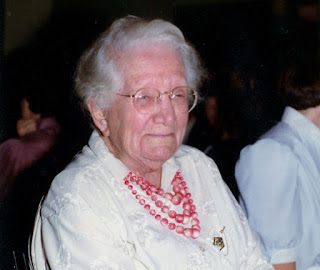 "Others got on the train that ran from the lakeshore to Covington and Abita Springs. This railroad, built in the early 1900's, ran from Covington to Mandeville, passing through Abita Springs. It was called the "Doodlebug". The first such train was gas with a later one being run by electricity. The depot was on the site of the present Covington City Hall. It ran several trips a day to meet the boats that landed in Mandeville.

"It was very popular with young people and presented a very pleasant outing because big excursions came from New Orleans to Mandeville on weekends. It was a good way to spend an hour and a half with your girl and to enjoy the good music the people on the excursion had. Many of the people would ride the boat over to New Orleans and then come right back to Mandeville..

"The three places the boats from New Orleans landed near Mandeville were:

1)    St. Tammany Pier — This was in the middle of the block between Coffee Street and Carroll. There was a large pier built for the boats — it extended about 1500 feet into the lake. It had to be far out as the big boats had to have deep water to dock. There was a large dance pavilion at the shoreline. This pier burned down around 1916 and was never rebuilt.

2)    The Camellia Landing was built around 1850 and was at the end of Girod Street and the lakeshore, opposite the Nemo Theater. It, too, was destroyed by fire around 1912.

3)    Lewisburg Landing — at Dr. Lewis' Plantation. Boats from New Orleans would first dock at Camellia Landing, then to St. Tammany Pier and then to Lewis Landing. The boat then might continue to Madisonville and then up to Covington up the river and would dock at the end of New Hampshire Street in Covington, near Bogue Falaya Park.

"Ms. Paine recalls the Dew Drop Dance Hall and remarked: "The Dew Drop was always having some kind of affair. In 1928 it was going strong and very active."

"She remembers some of the bands around Mandeville: "There was a Negro String Band -about eight pieces. They didn't read any music, but they played the greatest dance music.

"Then when they played at the Dew Drop they played 'hot' — you could really dance to that music. They also played at Jackson Park on Coffee Street. There they had concerts, picnics, and dances on a big pavilion in the middle of the park.

"Mandeville had a brass band in the early 1900's. There were about 12 in the band. On the shore of the lake were various hotels and restaurants that used music. The Audubon Hotel was at the comer of Lakeshore and Wilkinson. The present location of the Rest-a-While around 1900 was the Frappe Hotel."
"Other places located on the waterfront included the St. Tammany Hotel at Lakeshore Drive and Lafitte Streets; Mitchell's Hotel at Girod and Lakeshore Drive; A dance hall on Lakeshore Drive between Coffee and Carroll Streets; the Lake View Hotel at Adair and Lakeshore Drive. 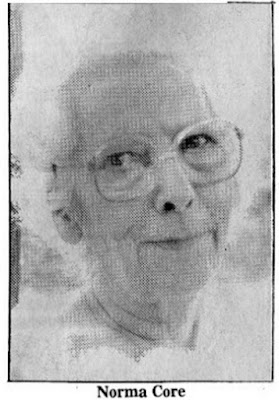 "She remembers riding the 'trolley' to Mandeville and attending the dances that were held on the Camellia Pier. 'In the 20's I attended the dances at the St Tammany Hotel,' she said. 'We had both black and white bands playing for the dances. Evening clothes were worn to these dances. The ladies wore evening gowns and the men suits.

"The Saturday night dances at the old Nemo Theatre were more informal. The bands usually were from five to seven pieces; trumpet/comet clarinet, trombone, banjo, bass, drum, and sometimes piano.

"To attend the dances it was usually from $1.00 to $2.00. We attended dances in Jackson Park and danced on the pavilion in the center of the park. We would go to Madisonville on Friday night for dances and Abita Springs on Sunday.

In the next excerpt, Dr. Koenig tells about the local musicians meeting people at the boat landings, inviting them to come visit their clubs and attend their concerts:

"Musicians from the bands on boats like the Susquehanna, Camellia, Hanover, Victor and the Mandeville, which made fairly regular trips across the lake, would come to Mandeville and Madisonville. The boats, which made one trip on Sundays, would arrive in Mandeville about 11 a.m., the boats would go to Madisonville that night and tie up, and leave Monday, sometimes Tuesday for New Orleans. The Camellia sank at its dock in the Tchefuncta River near Covington of old age.

"There is no longer any evidence of the boat landings along the lake shore in Mandeville, nor are the dance pavilions there. There are a few hotels left along the beach but are no longer the exciting places they were during the early Twentieth Century. Jackson Park now has a number of houses on the area it once occupied." 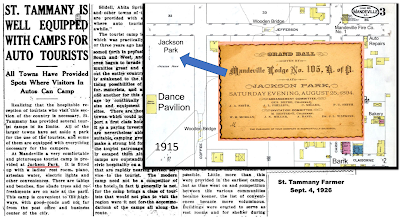 Dr. Koenig included this and much more information about jazz heritage on the North Shore in his book "Mother of All Jazz Waters: Lake Pontchartrain."  In a press release distributed about the new book, it was stated that local Jazz historian, Dr. Karl Koenig, the recipient of a grant from the Jazz &  Heritage Festival had completed a book on the history of music on Lake Pontchartrain.

"The book, a large volume of information, includes material on the music scene of  many of the towns of the north shore: Mandeville, Covington, Madisonville, Abita  Springs, Bogalusa, Ponchatoula and Hammond - all are included.

"Many of the most  famous musicians in jazz either lived on the north shore or performed numerous times in  the jazz sites mentioned in the book. The history of the south shore is given and includes the colorful history of  Milneburg, Spanish Fort, West End and Bucktown.

"Also included is material on the  various lake steamers that continually crossed the lake carrying passengers and large  groups for excursions to the north shore famous resorts.The book was published by Basin Street Press."
His many other books on jazz history are foundational to any study of jazz, especially his "Jazz in Print (1859-1929): An Anthology of Early Source Readings in Jazz History." 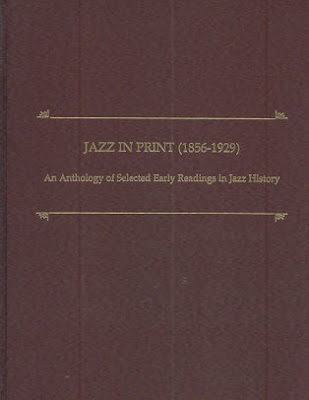 His book on Northshore jazz heritage is available for reading online in a Adobe Acrobat PDF file which may be accessed by CLICKING ON THIS LINK.

The book includes the outstanding history of the lakefront in Mandeville and Madisonville and describes the very active musical scene on the north shore, which at times rivaled the extremely active lakefront of the south shore, the home of the legendary town of "Milneburg." 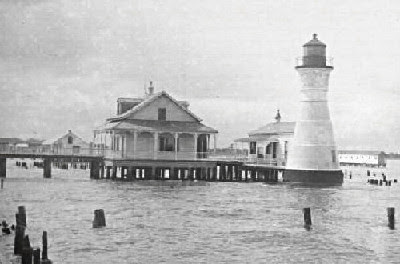 The Milneburg lighthouse was a key feature among the camps of Milneburg, which was also known as Port Pontchartrain. It was a resort town offering all kinds of entertainment, especially jazz. Boats would leave from here and head across the lake to Mandeville. Milneburg was connected to downtown New Orleans via trains pulled by the famous "Smoky Mary" locomotive. Later this area continued its entertainment heritage by becoming "Pontchartrain Beach" amusement park.

Dr. Koenig's book also has an interesting account of dances and bands in Covington during that time period. Start reading the PDF file above at page 105 for that Covington information. His extremely detailed account of the music offerings and heritage of the entire North Shore of Lake Pontchartain makes for an entertaining several pages of reading.

According to Dr. Koenig, "It has been said that on the weekend a New Orleans musician was either playing on an advertising wagon on the streets (of Mandeville) or at the lakefront playing for a picnic, party or dance." His jazz history book covers the bands and musicians that played in the Mandeville area from the 1890's to the 1930's.
Posted by Ron Barthet at 3:00 AM