One of the first people to write an extensive history of St. Tammany Parish, with information pulled from a wide variety of sources, was Adrian Schwartz, a Covington attorney and amateur historian.

Schwartz, originally from St. Louis, came to Covington on the train around 1910 to visit some relatives. He found it to be such a great place, he never left, according to an attorney friend of his. Records indicate he ran for the Covington Board of Aldermen in 1917.

He lived and maintained a law office above the Von Schneider Clothing Store in the Patecek Building on the corner of Columbia and Boston Streets. Schwartz was always tending a few flower boxes as well as keeping a "feline menagerie" on the flat roof above the Norman Haik store, History Professor C. Howard Nichols, a friend of his, recalled.

The young Nichols met Schwartz in Covington and became acquaintances, both interested in history. "I finally entered into that special province of Mr. Schwartz when, as a graduate student in history at LSU, I met him on the street and expressed an interest in his history of St. Tammany Parish," Nichols said. For years people had commonly reported that Adrian Schwartz was writing a history of St. Tammany.

"I don't know why he agreed to show it to me; maybe he was flattered by a young man's interest in his work. In any case, he pointed to a large cardboard box filled with the typed manuscript pages," Nichols said. "In between the typed pages were sandwiched deeds, legal briefs, tax receipts, and all of the other documentation of his history." 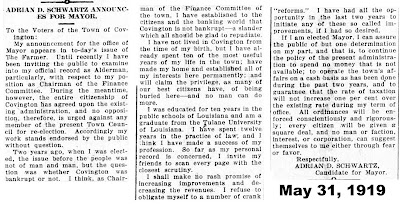 Schwartz ran for mayor in 1919. Click on above article to read more about his background and accomplishments

Schwartz was known to be a well-read man of literature, as well as a poet. Repeated attempts to have his entire history manuscript published were made, but not successful.

"I remember being impressed with the manuscript and its documentation, and I confided in my attorney friend Garic Barranger that if Mr. Schwartz died while I was away at school, someone should be sure and salvage the manuscript," Dr. Nichols recalled.

However, the entire manuscript was never found after Mr. Schwartz died, according to his attorney friend. Two short versions of the Schwartz manuscript did reach print, the first being in a publication titled "St. Tammany Parish Resources and Facilities published in cooperation with the state of Louisiana in 1953, and the second ten years later, in 1963, when the Covington City Council published Sesquicentennial in St. Tammany. CLICK HERE to see a scan of that booklet in PDF Format. That publication was subtitled "The Early Years of Covington, Madisonville, Mandeville and Abita Springs, Louisiana." 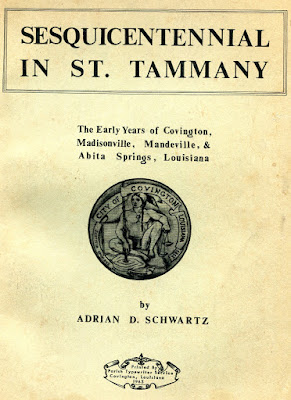 In his preface to the above booklet, Adrian Schwartz wrote the following:

At the end of the booklet, he made the following acknowledgements: 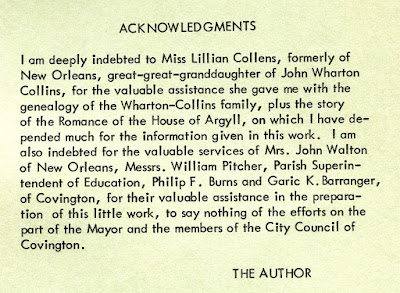 In addition to Schwartz leaving us the above exhaustively-researched booklet telling of the history of the area and in particular, the town of Wharton, later known as Covington, he also provided several pages of a condensed version that contained an overview of his history manuscript.

Here is a link to a PDF copy of a historical overview of the area that Adrian Schwartz wrote back in the 1960's.